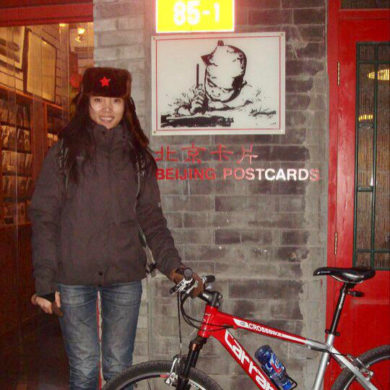 Jing was born in the mid 80s, in a city called Anshan, in Liaoning province, northeast of China. Her hometown is over 9000 square kilometers, with a population of more than 3.5m people. She grew up in Anshan and at age of 18 years old she moved to another more northern city Changchun for 4 years for university, then moved to Beijing in 2008…for work until the summer of 2016. She moved to Hong Kong and have lived here for three years. She is the single children of my parents who are both retired now and all her family are living in my hometown. She learned English in university and at the moment works for a German company, Mercedes Benz Hong Kong. She has a German boyfriend, and they have been together over five years now.  They met in Inner Mongolia during a mountain bike race and both were living in Beijing at that time.

Jing Zhao was born in China and now lives in Hong Kong. She is from a very traditional Chinese family. Her partner is German and having to shift between the two cultures is not always easy. Jing sits down to chat with Jules Hannaford of Hong Kong Confidential about her life, Chinese family values, and traditions. We learn about how Jing manages to balance life in two different worlds.